After 16 hrs we arrived in Casablanca. Air France via Paris was comfortable and offered small luxuries other airline seem to have forgotten about. A nice touch was the ice cream sandwiches handed out after dinner. Good food and gracious flight staff made the journey fly by. Upon arrival in Casablanca, we were met and transferred to the Moroccan House Hotel in the heart of the city. We visited the Hassam Mosque which has to be the most incredible building I have ever seen. Built in the 1980s for a small cost of 2.5million it can hold up to 25,000 people. We then travelled to the seaside to have lunch. Seafood especially a fish called Marlo is popular here and with every meal, an assortment of olives and bread are served...It was nice to see the Atlantic ocean and dip our toes in. We have an early start tomorrow heading to Fes. 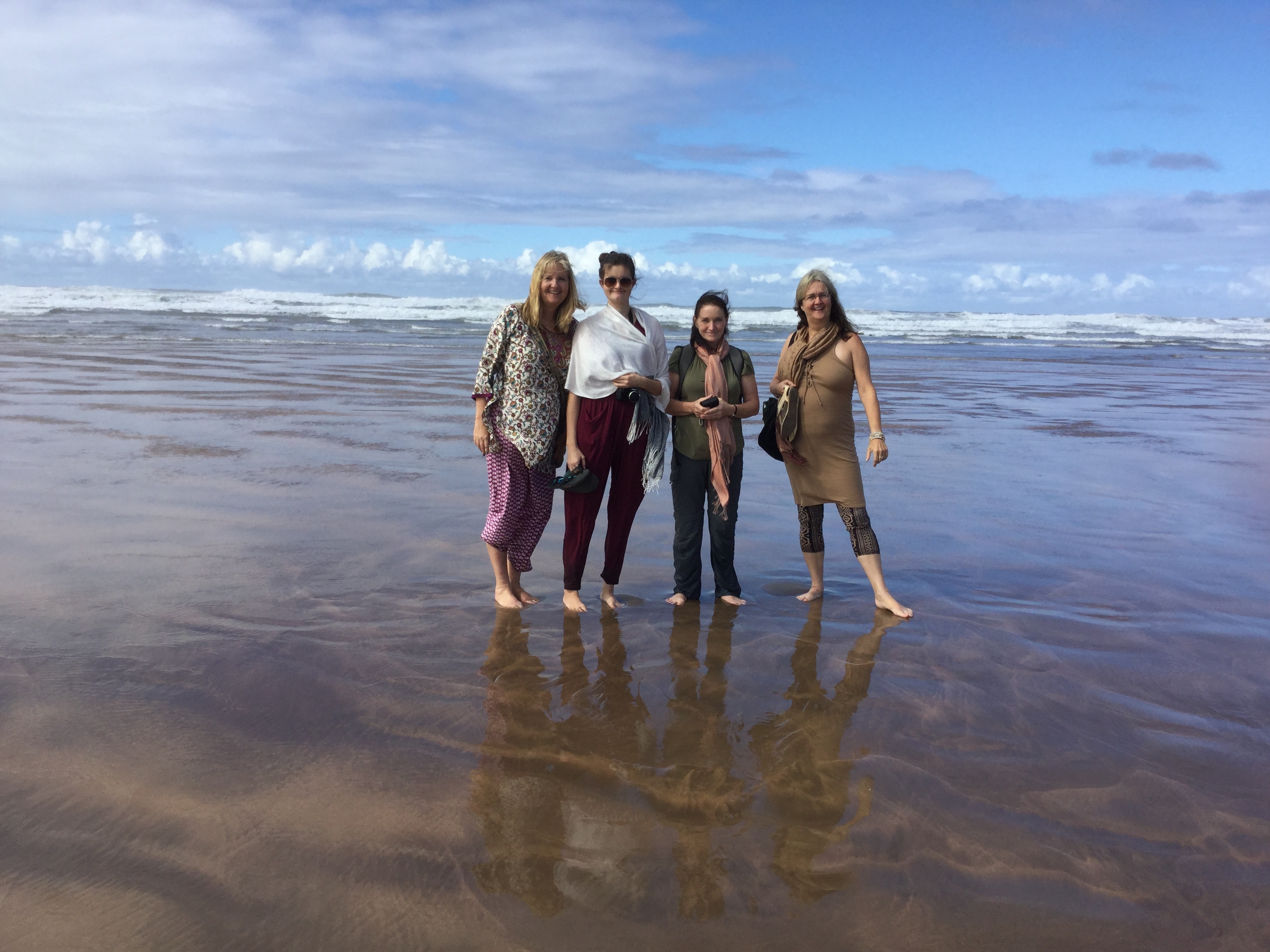 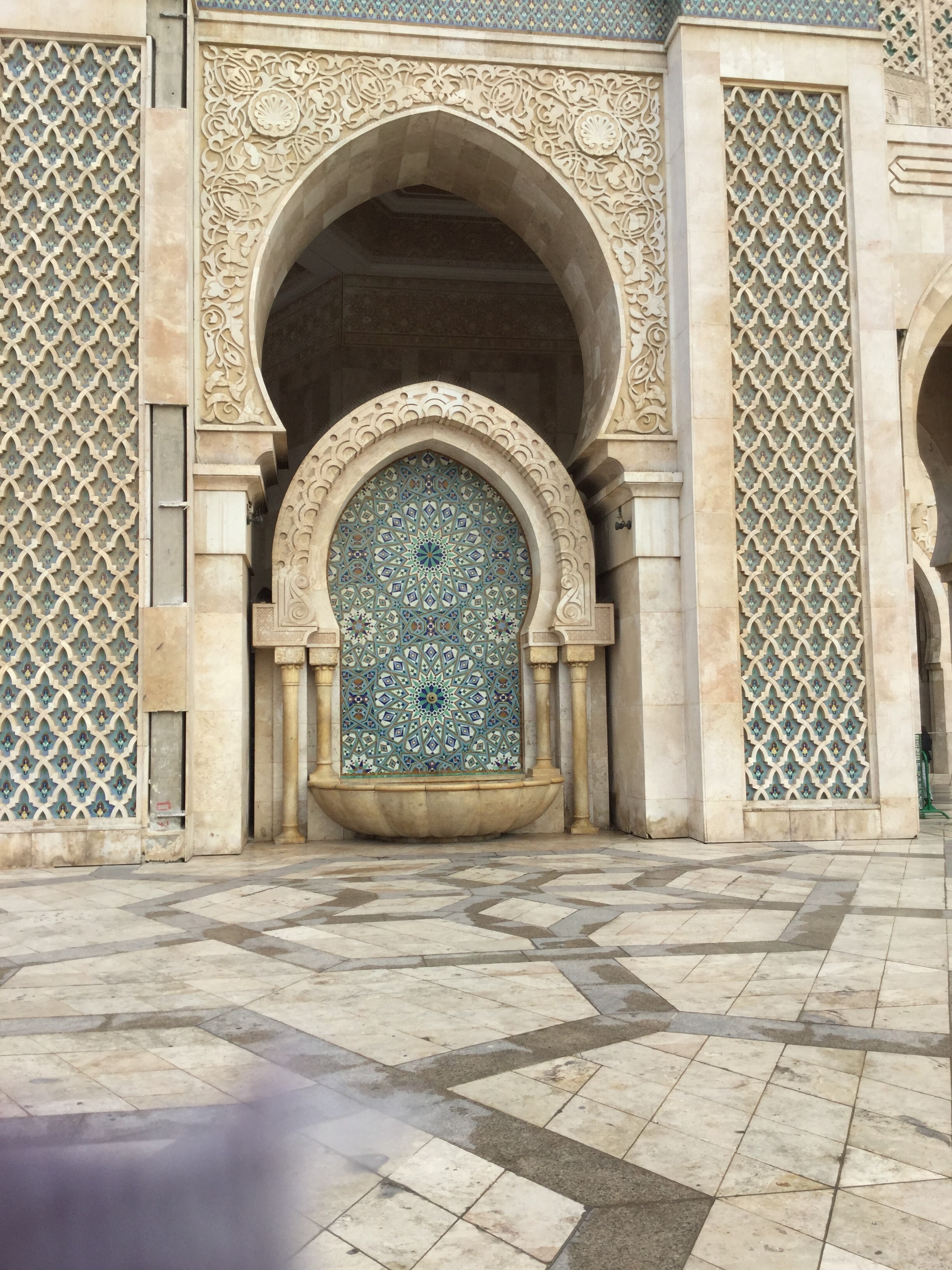 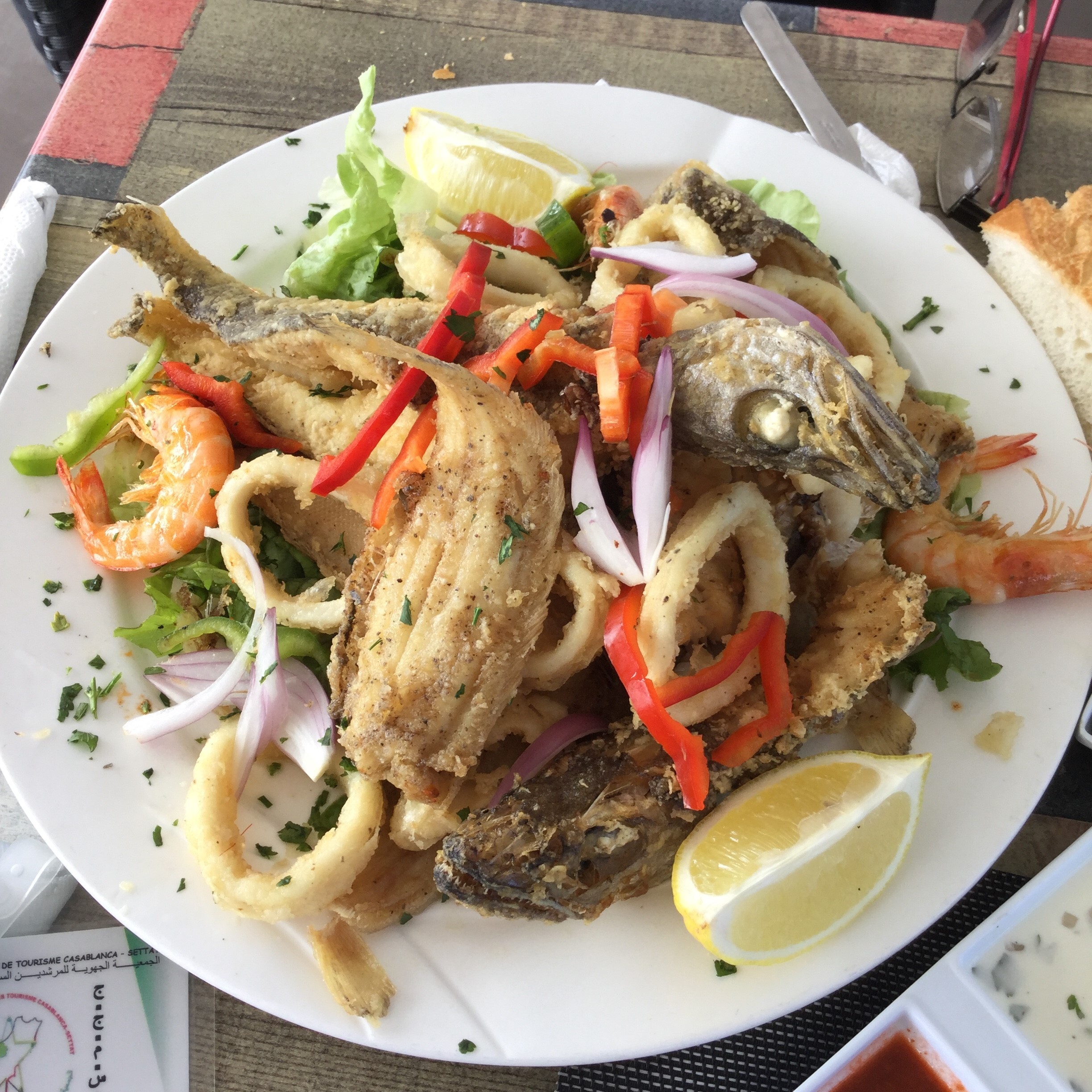 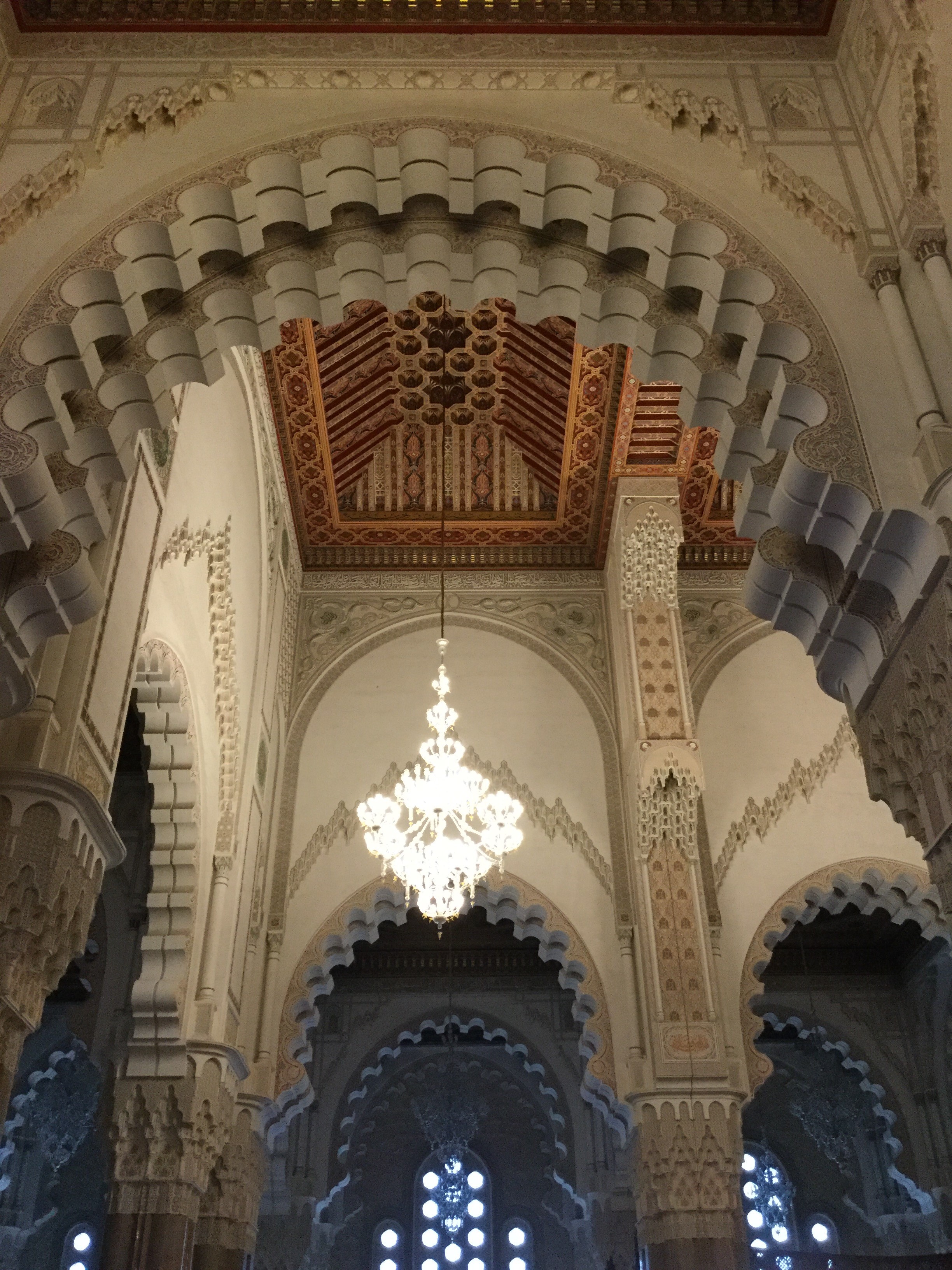 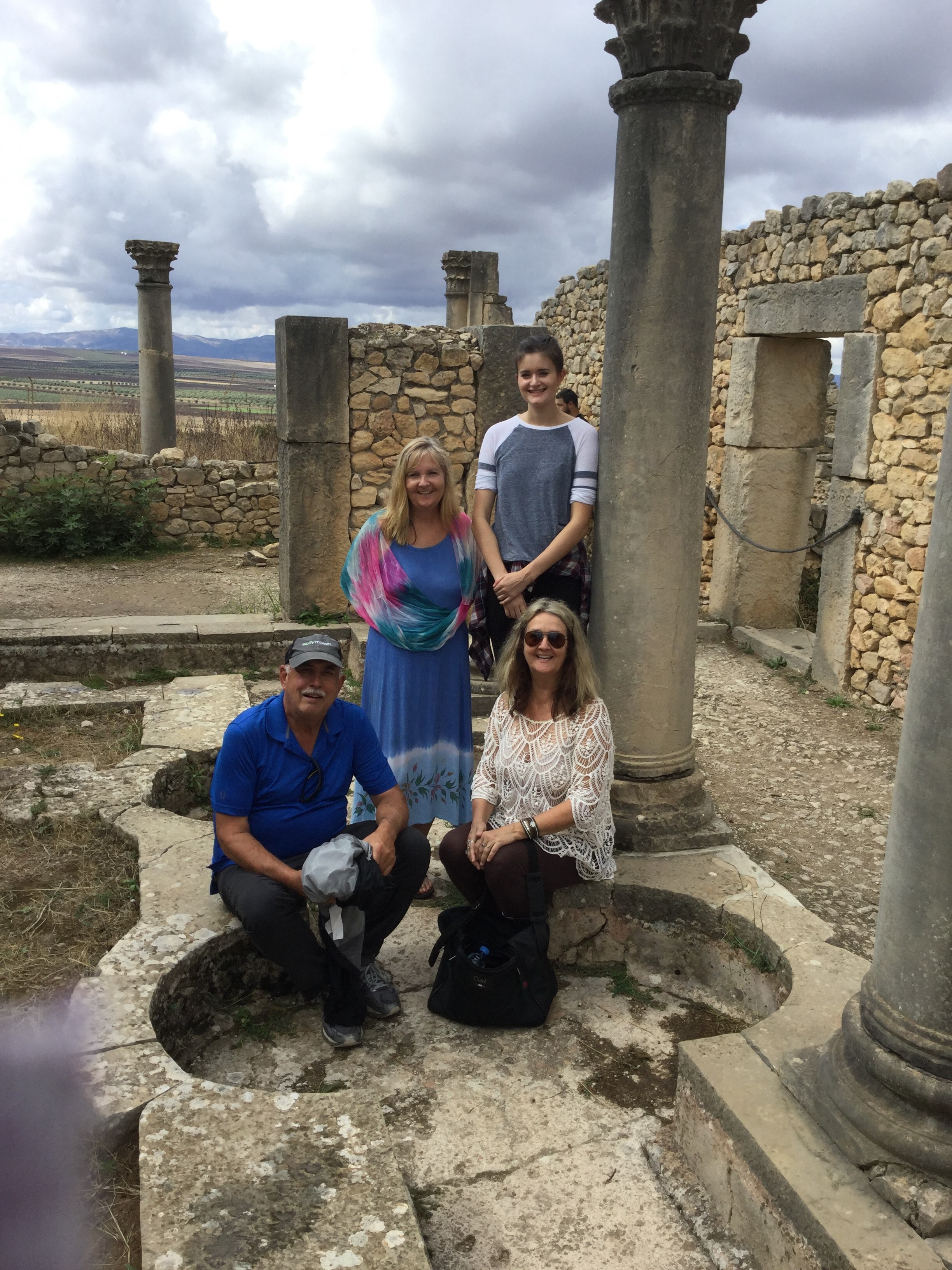 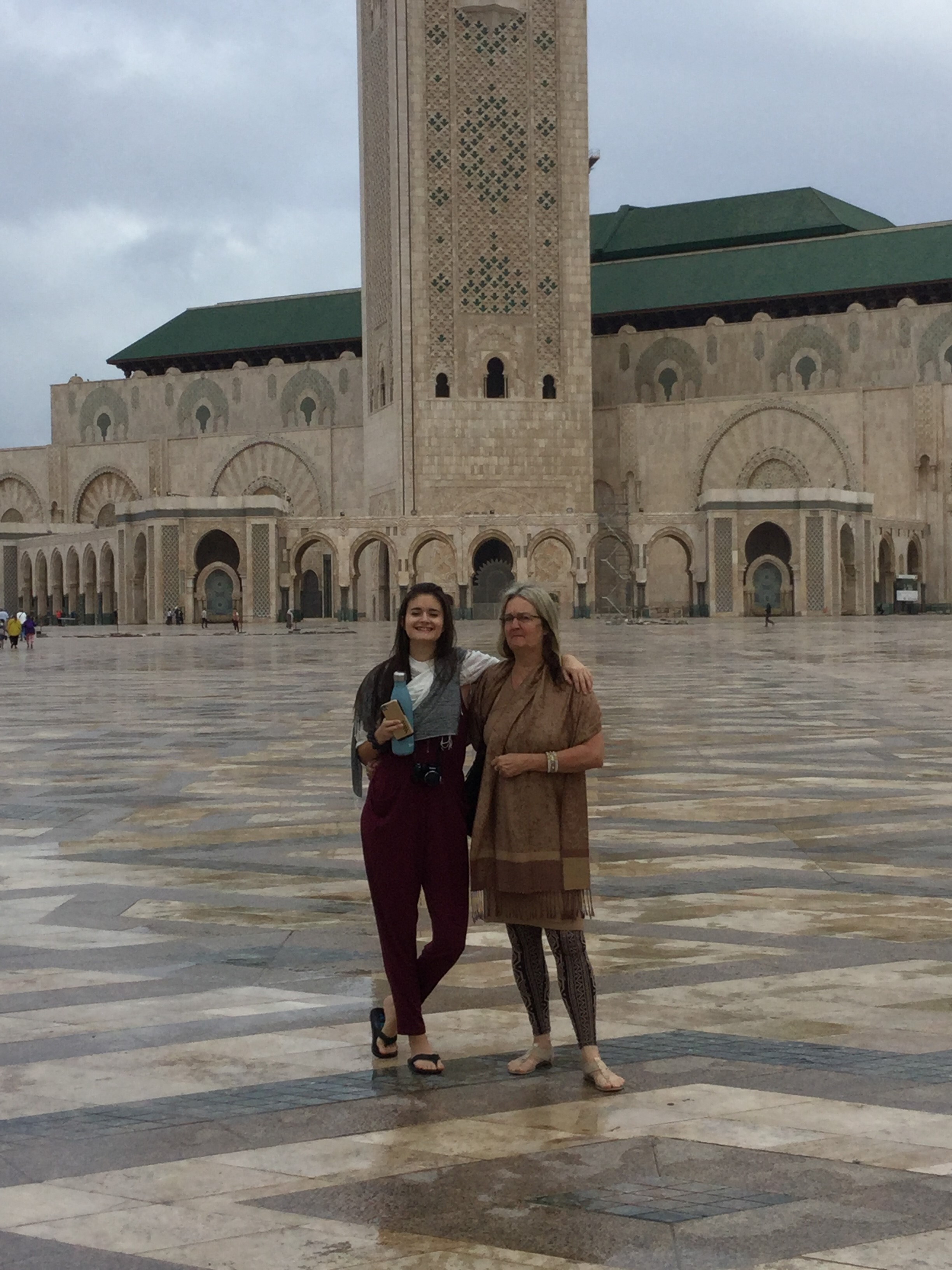 We traveled from Casablanca into the Atlas mountains, to visit the Roman ruins in Volubilis. The ruins go back to 400AD and in 1755 an earthquake struck Lisbon and it destroyed most of the Roman city killing almost 20,000 people. Only 1/3 of the site has been excavated however it has now been declared a UNESCO world heritage site, so shall receive funding. The next step in the process will be to excavate and locate the Coliseum, where the gladiators fought. The average gladiator was no more than 170lbs. Down the centre of the street, the entrance to the city was their sewer system. It ran under the stone walkway. The countryside is very lush and the crops are mainly wheat, barley, lentils and olives trees. Moroccan food is very good. The main dish is called tangine which consists of chicken, or lamb with vegetables, spices, onions, olives cooked in a clay pot which makes the meat incredibly tender......delicious. Our best meal so far was at a homestay where we had tangine chicken with olives. Gadventures supports a local community of women who help handicapped children in Meknes. It was a very rewarding visit.
After lunch, it was onto Fes for a 2 nite stay. 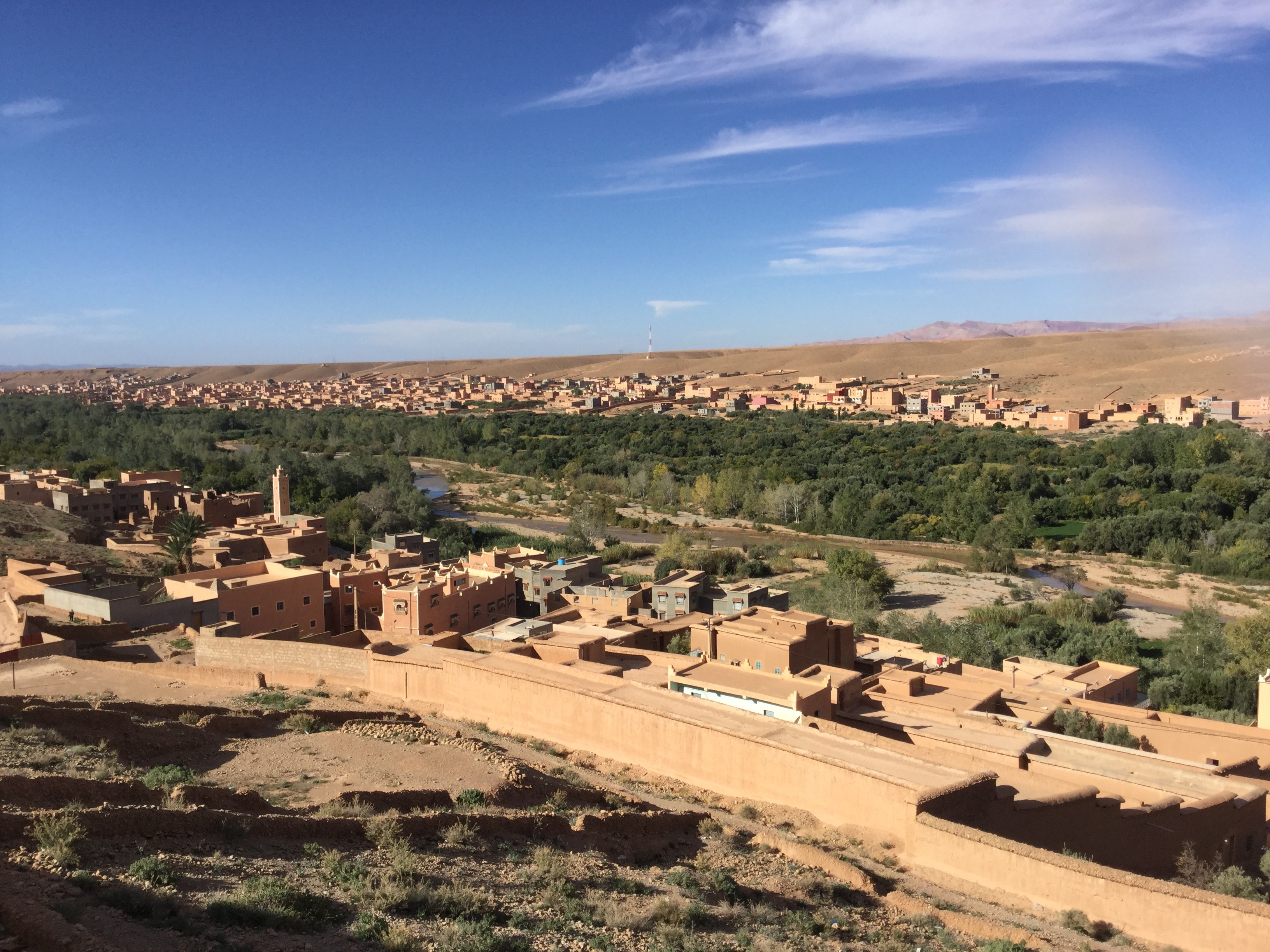 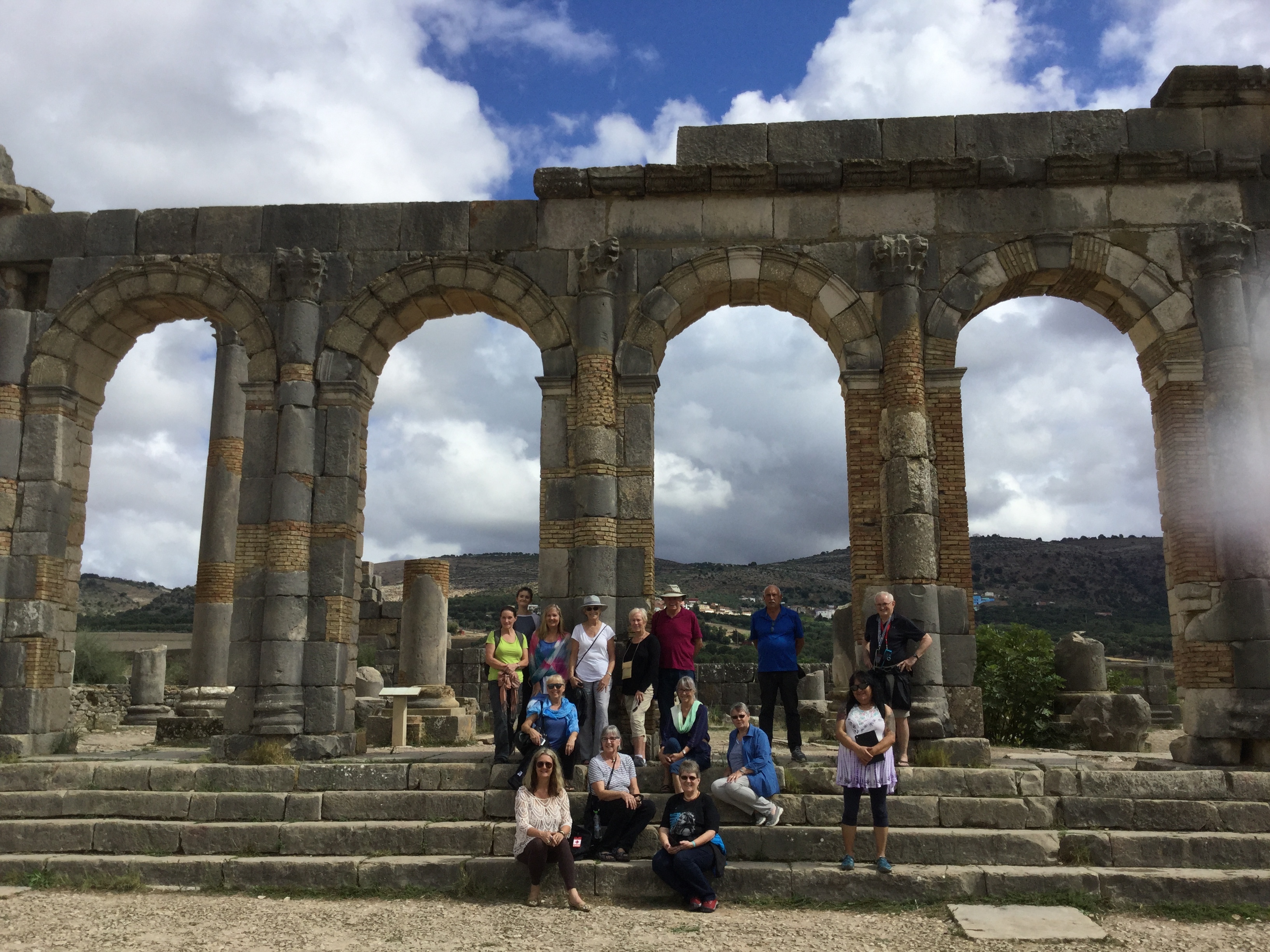 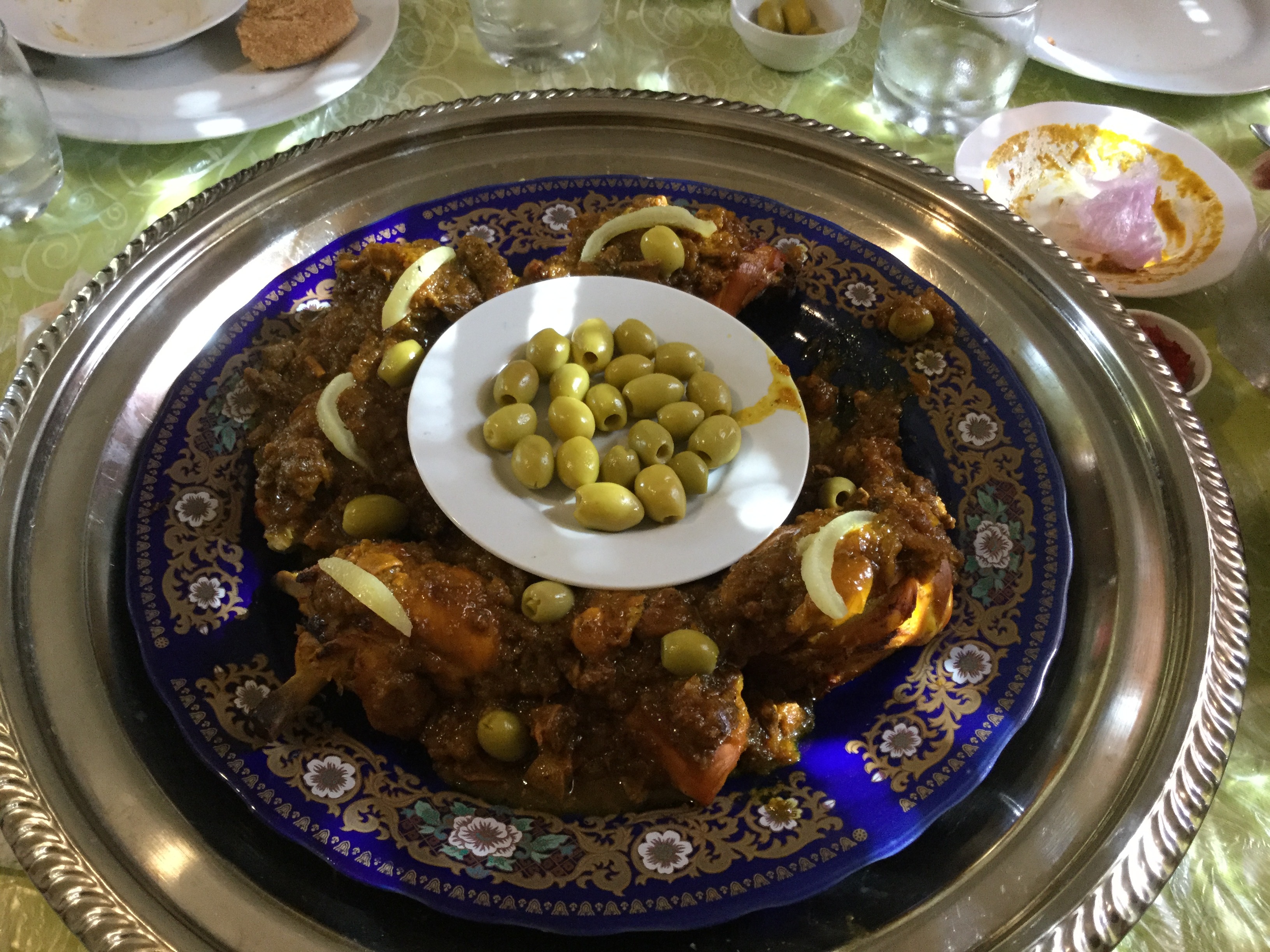 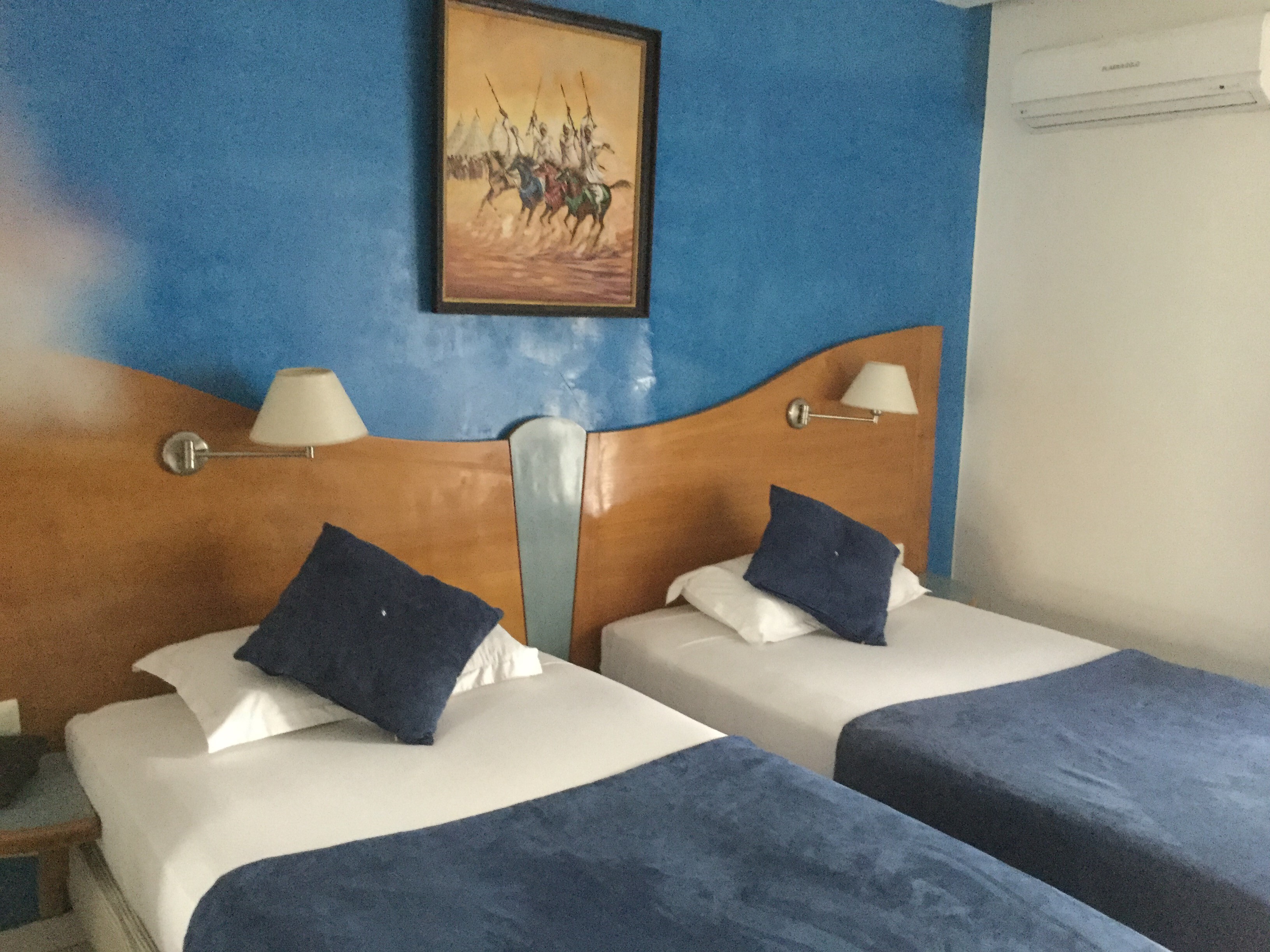 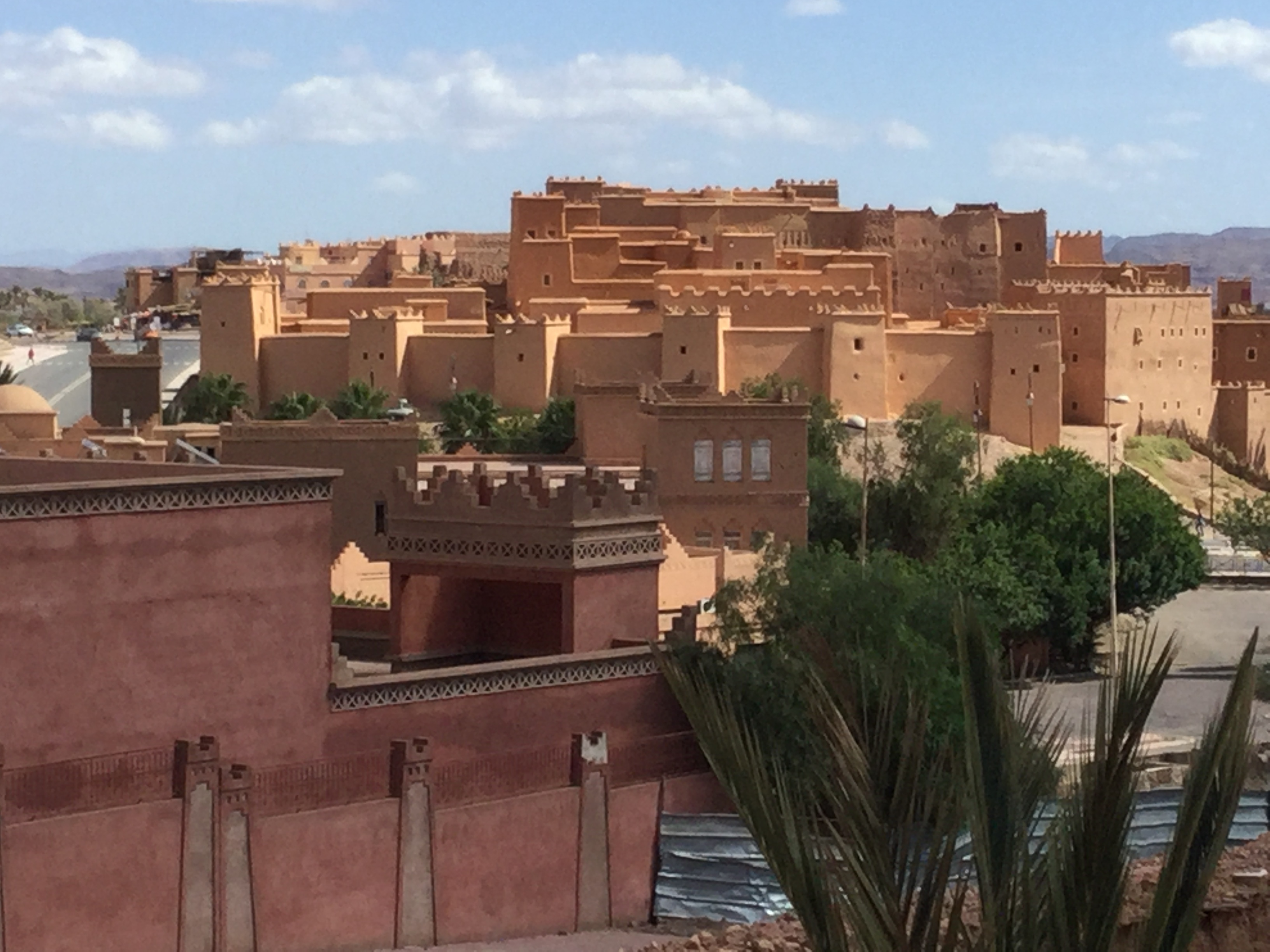 Fes is a very old city with a population of 3 million people. It is home to one of the largest Medinas in the country. This Medina consists of 9000 alleyways which sell absolutely everything you can imagine from vegetables, meats including (goat heads), pottery, brass, jewellery, clothing, leather goods and much more. The alleyways are quick narrow and winding so u need to pay close attention to where u are going as it is very easy to get lost. We had a guide at the front and back of the group just in case someone went astray. It was raining today sadly which did hamper the visit into the souks. Full of interesting smells and sites to enjoy. 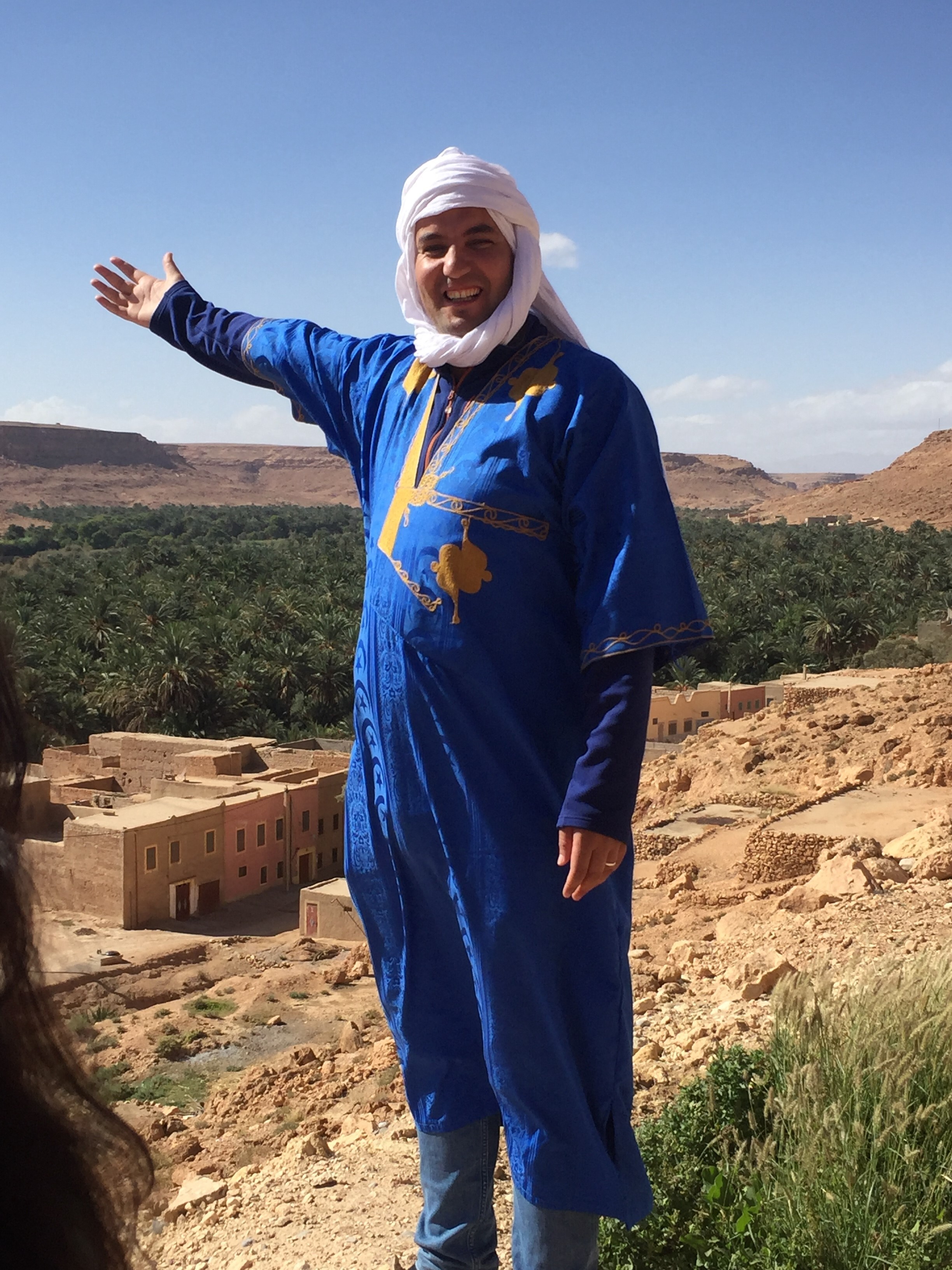 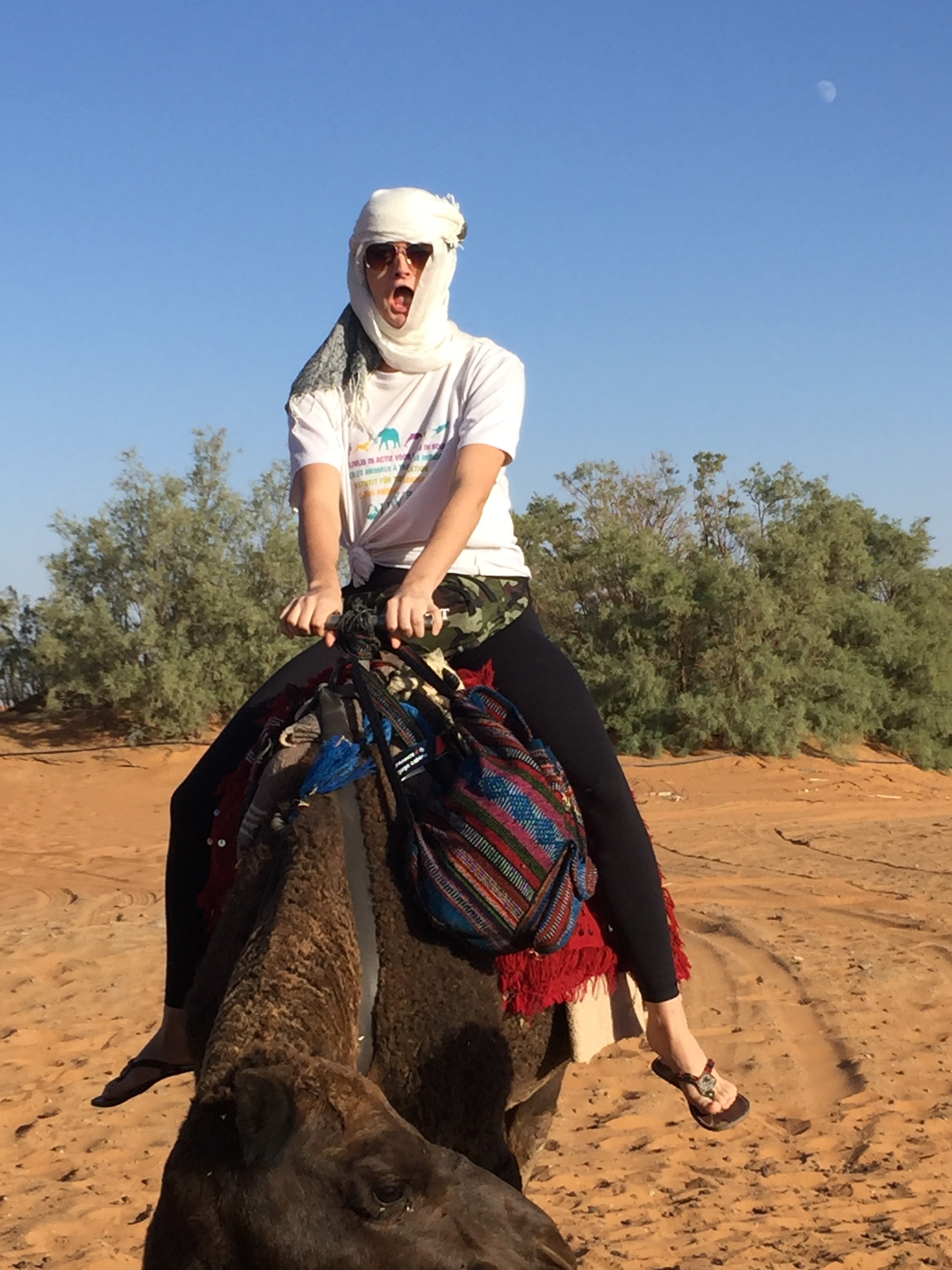 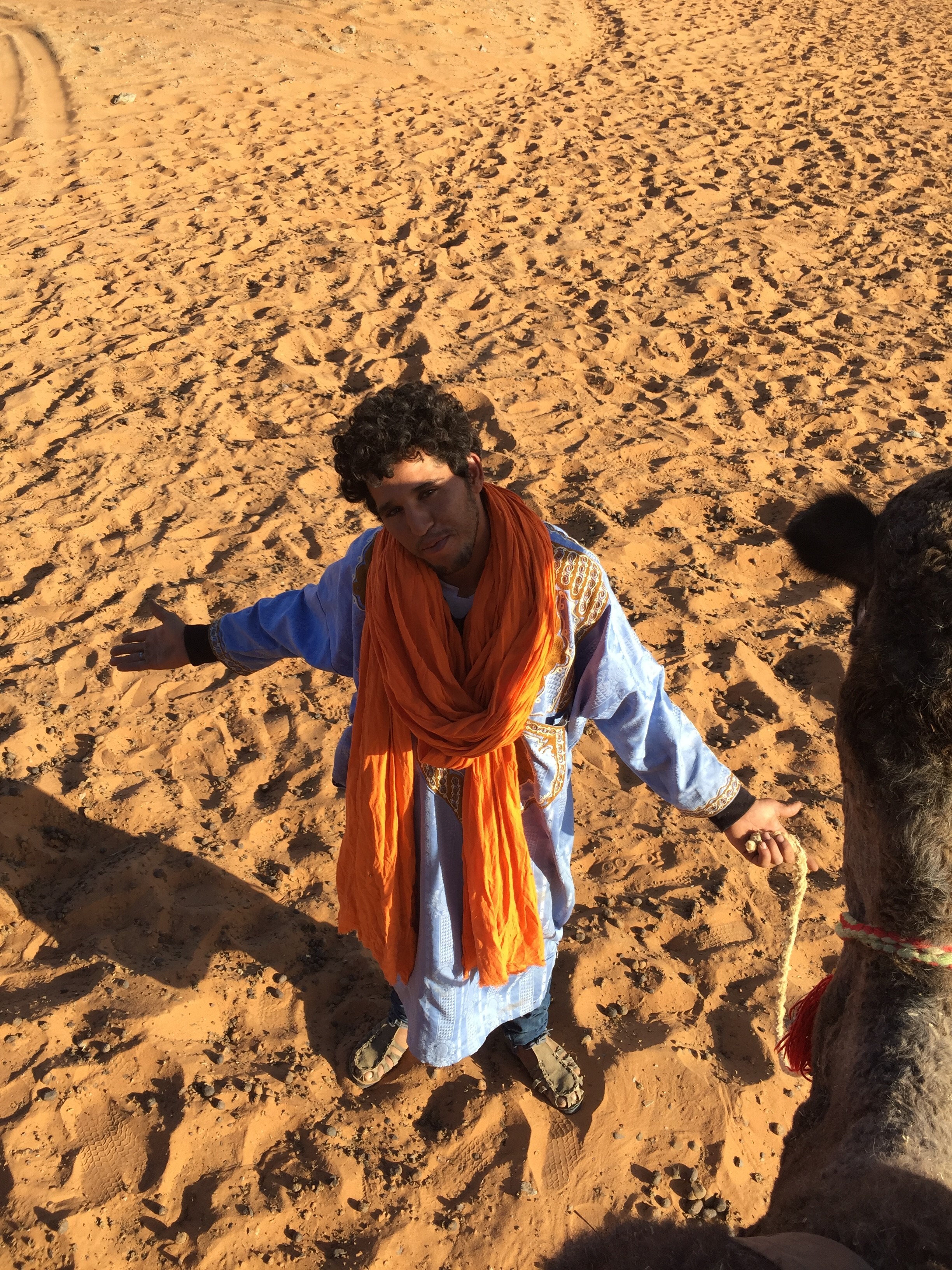 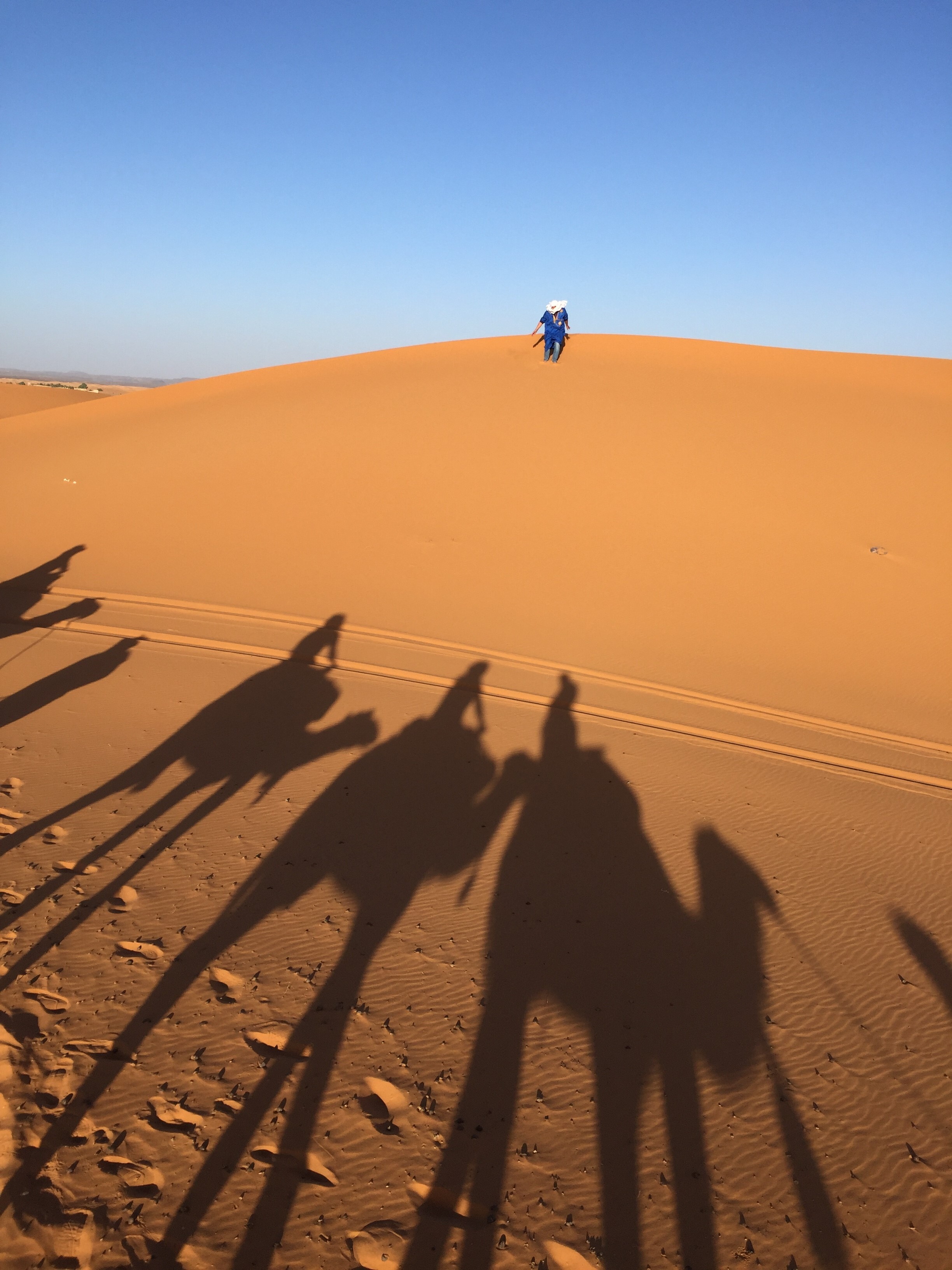 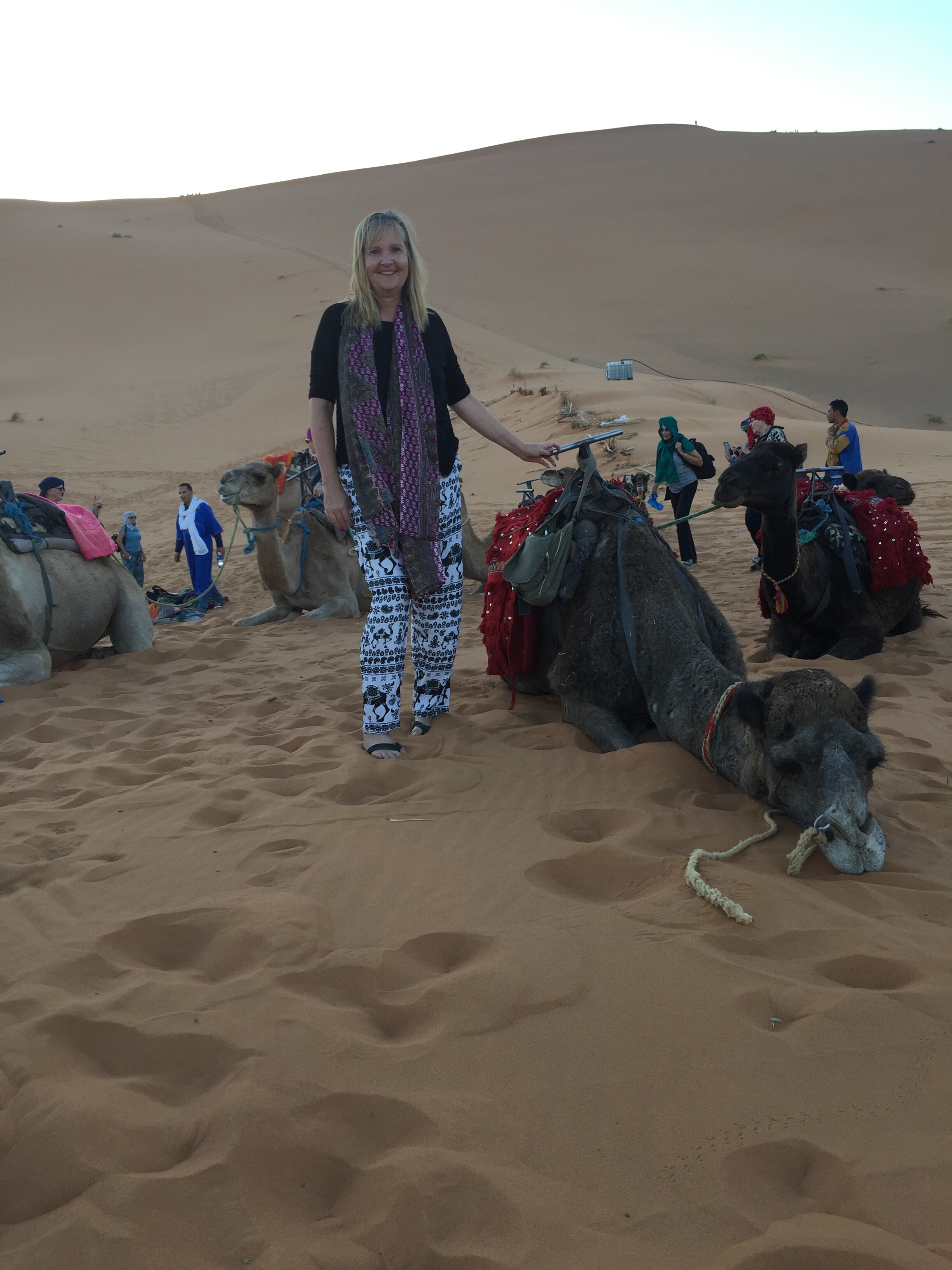 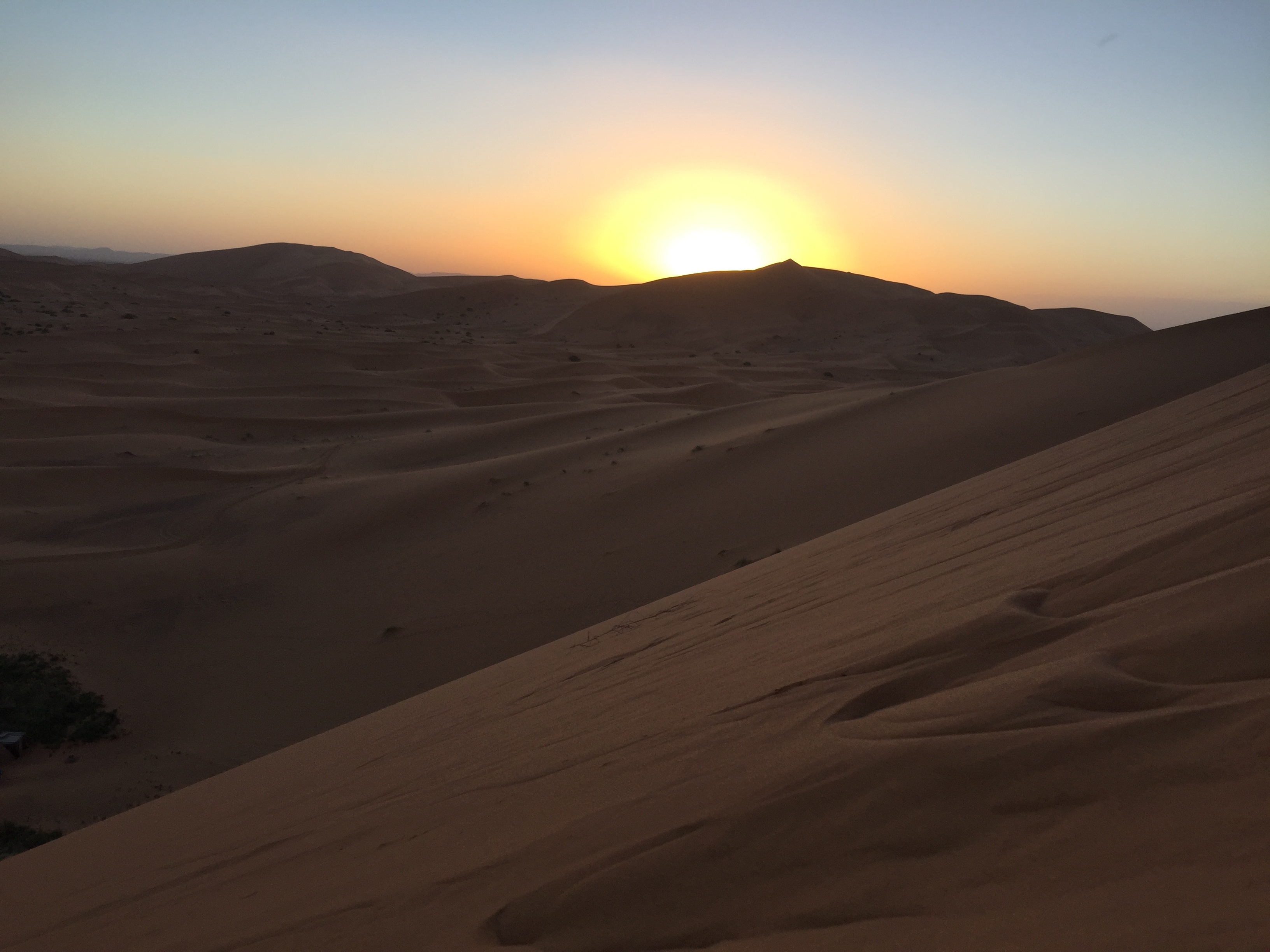 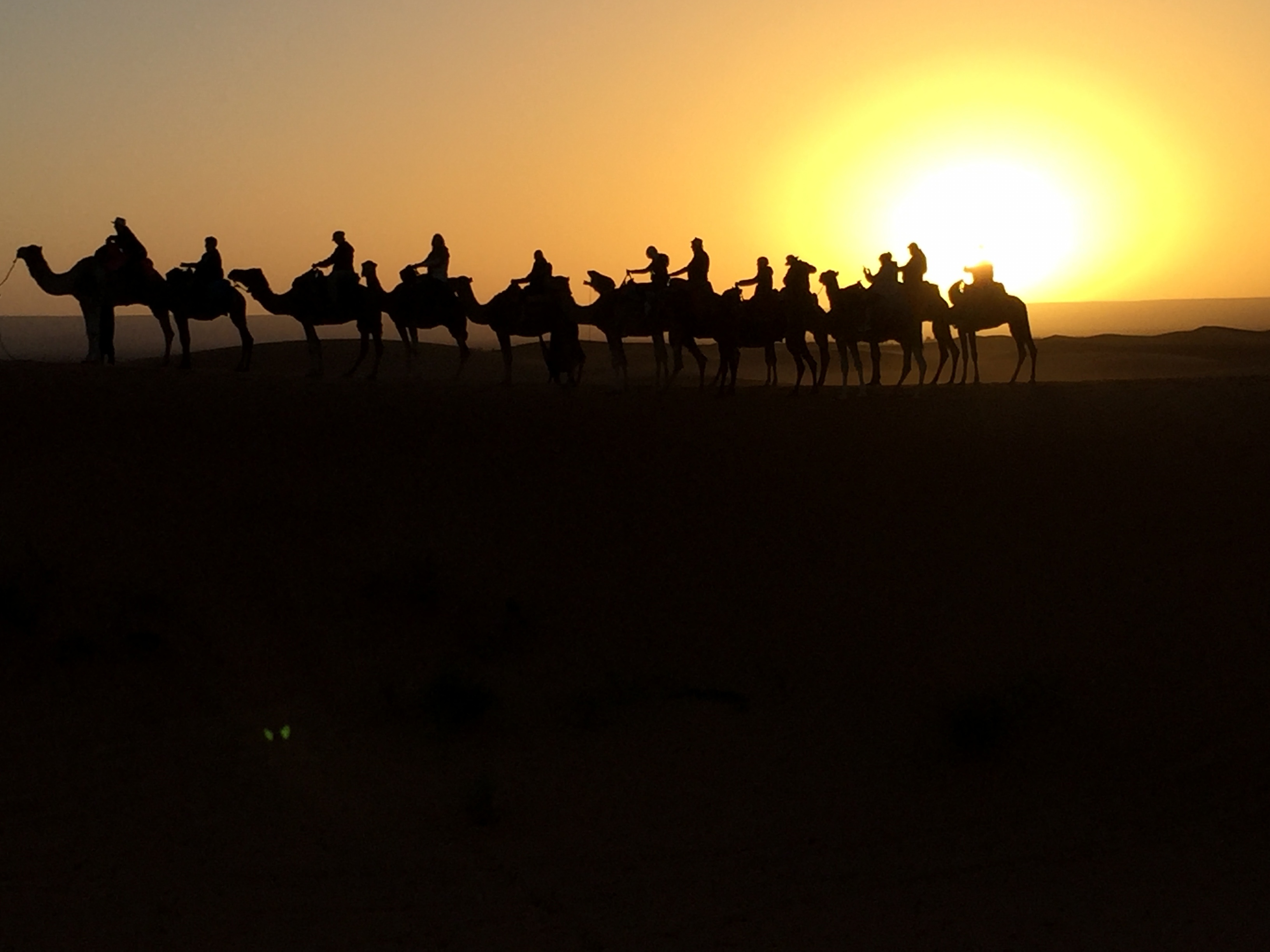 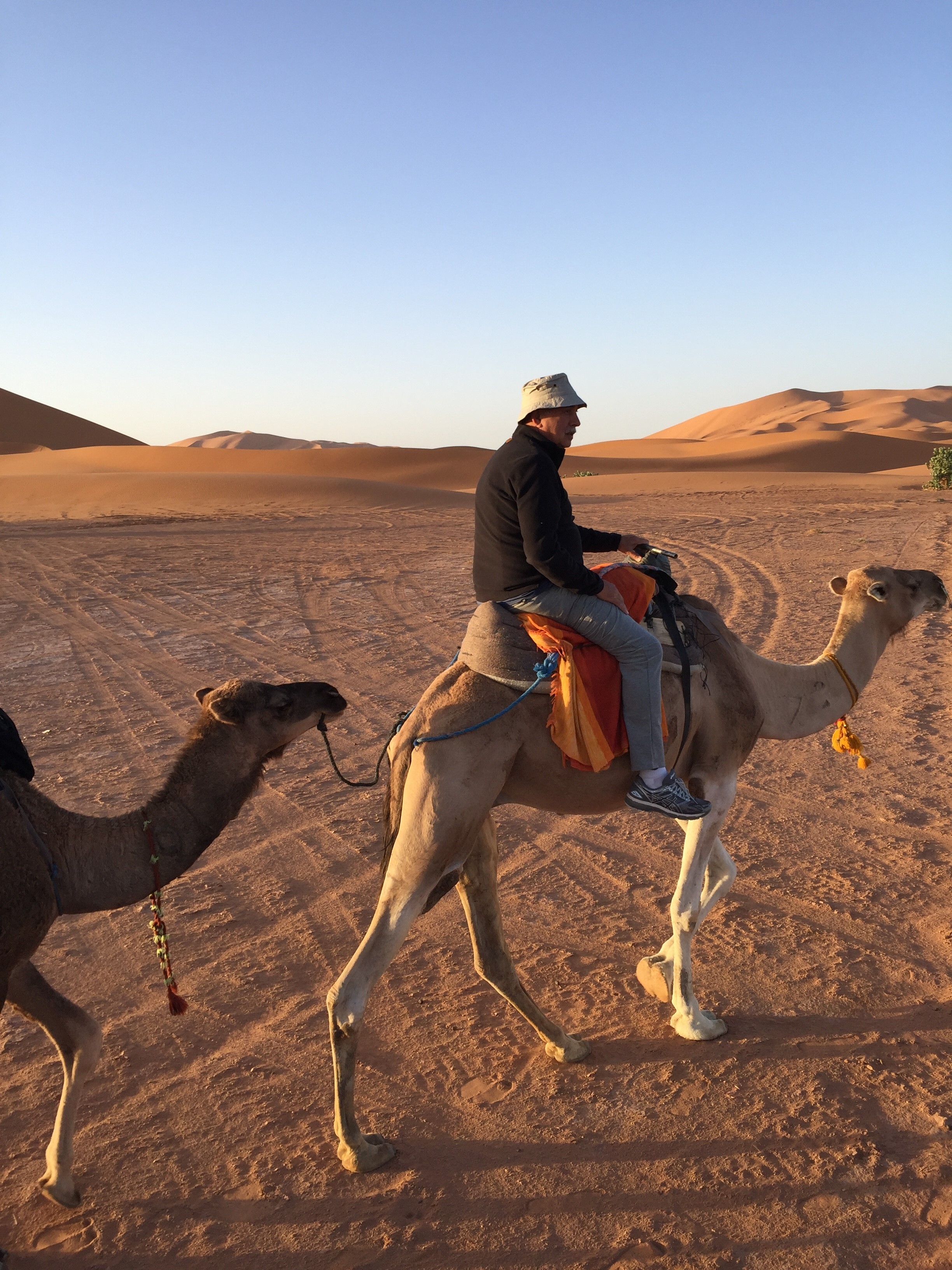 We began the long journey over the middle Atlas mountains into the Sahara desert. The trip took about 9 hrs with several stops along the way at small restaurants for coffee and snacks. Upon arrival into the desert the entire bus was speechless, the rolling sand dunes and colours where just as you would imagine. Seeing it all firsthand was a sight I will treasure forever. Our desert guides lead us to our camels we were to ride. Getting onto a camel proves quite challenging as they stand up on their 2 back legs first then up on their front legs, so if you're not holding on tight you could easily fall off. We trekked into the desert for approx 1 1/2hrs at sunset, stopping a few times for pictures. The camel guide leads the way so there were no roving camels which was very much appreciated. We travelled over several dunes until we reached our desert camp for the night. A few of us in the group decided to walk up to the highest point of a dune to capture the sunrise...Well worth the exhausting climb. The Gadventures camp was very comfortable with twin mattresses on the ground and the warmest blankets. There were 4 to a tent. For dinner, we had a traditional chicken tangine dinner followed by mint tea. We then sat around the fire while the camel guides sang and played music, all of course under the Sahara sky.
The stars you could see in the desert were a hundred times brighter than at home and was a magical evening I won't soon forget.
After a cozy sleep in our tents we heading back into the desert to watch the sunrise on our trusted camels. The pictures some of the group took were stunning as the sun was coming up over the dunes. The ride back felt more relaxing as we were now experienced camel riders (haha). Upon arrival back to the hotel, we had a lovely buffet breakfast before heading off to our next town.

Marrakesh is a bustling city full of colours, sites and culture. A day spent in the Medina is an adventure in itself. It comes alive mid-morning with sellers setting up their shops to sell everything from jewellery to dates. The centre of the square hosts a variety of entertaining people to watch, including musicians, monkeys dancing, and of course endless locals selling their goods..watch out for the ladies offering henna tattoos as they will start to ink you before you can say no thank you. I will say she did an incredible job which really looked like a tattoo. Marrakesh offers a variety of dining choices as they were ruled by the French until the 1960’s the European influences are apparent in the.city. Our hotel the Moroccan house hotel Marrakesh was very authentic quaint close to shops and restaurants. We all felt very safe wandering about on our own which was a good feeling. Our last day in Morocco today before heading to Amsterdam for 2 nights. 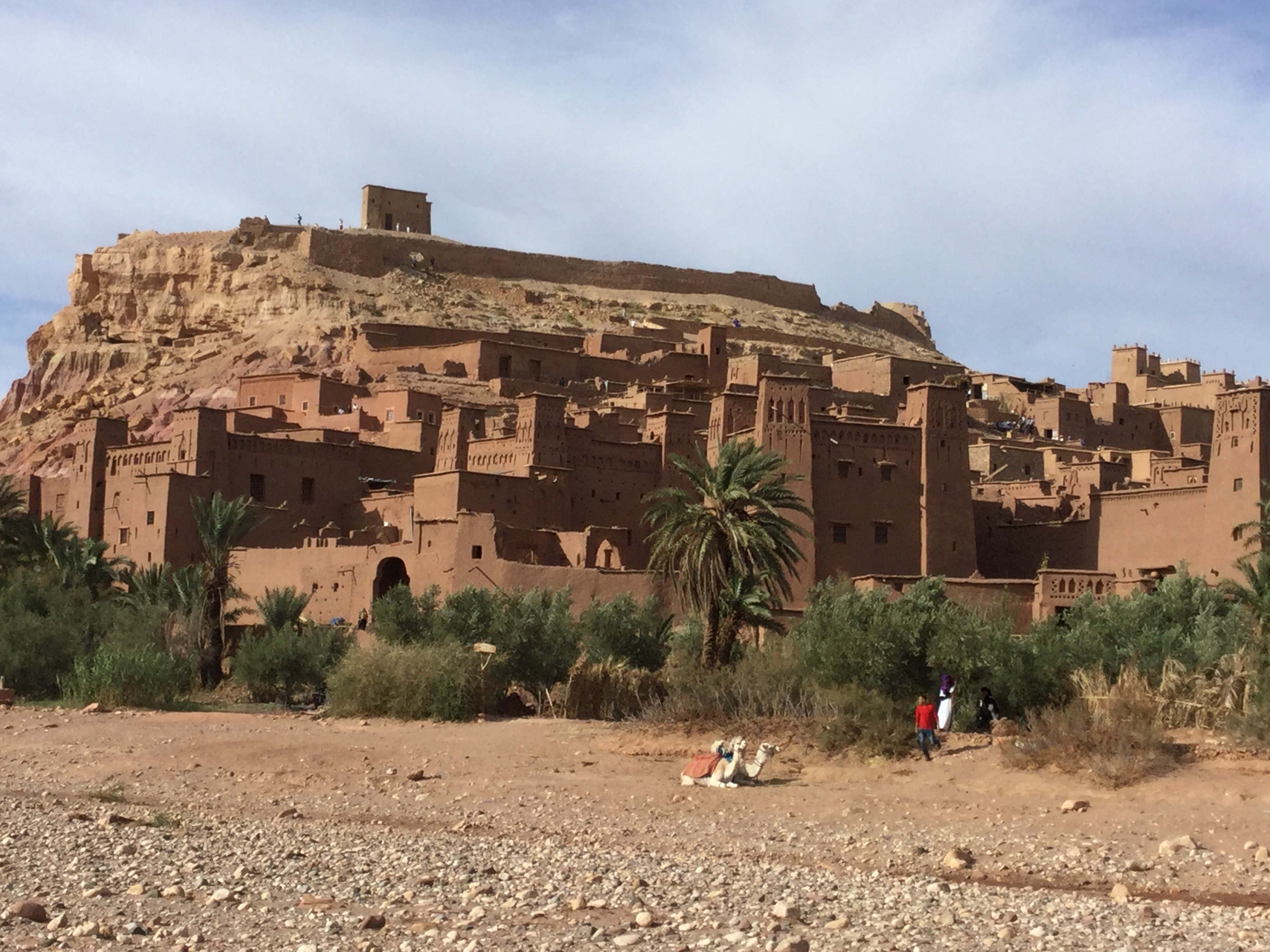 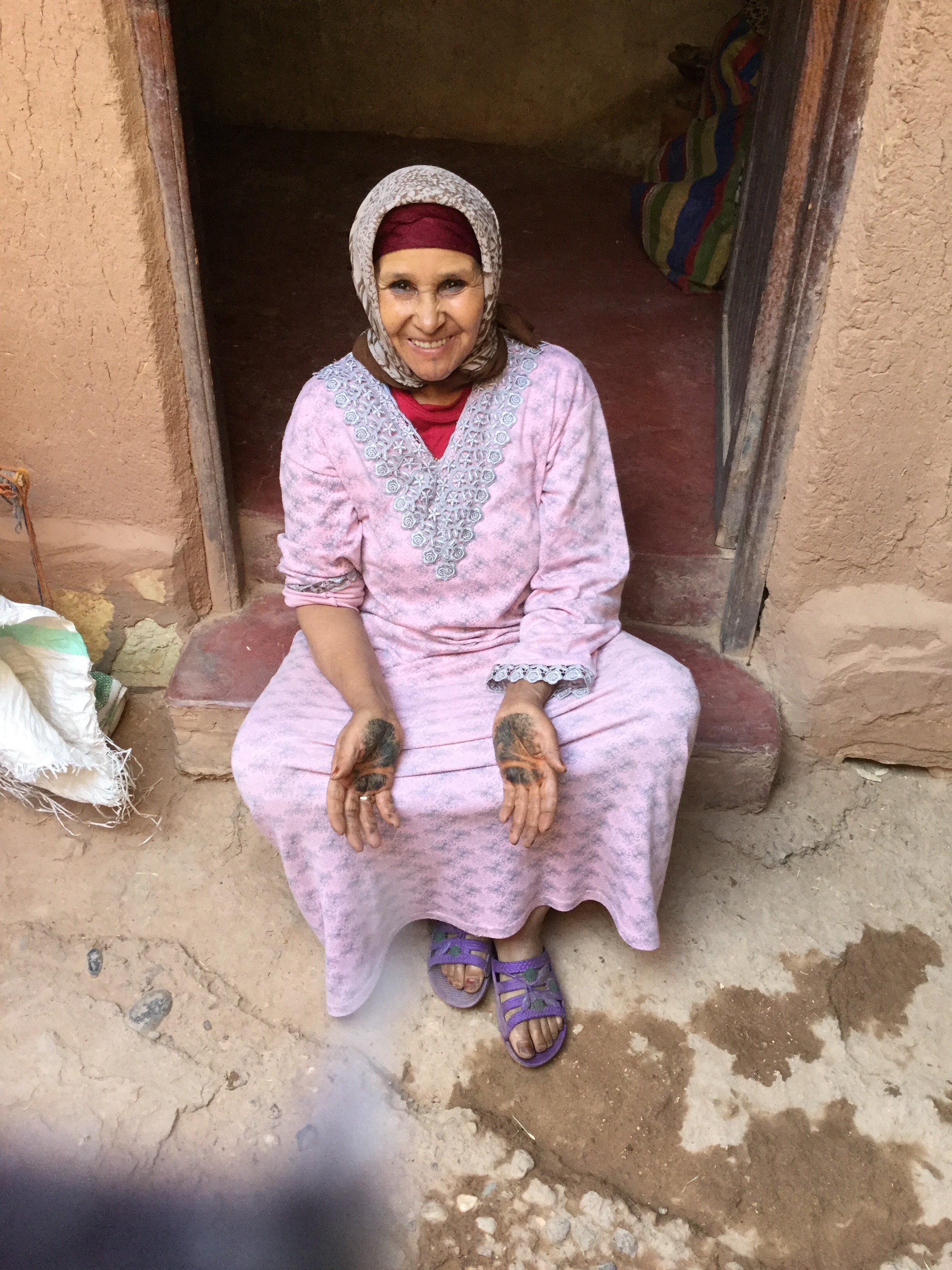 Amsterdam, we stayed in the central part of town which was so convenient for travelling and walking about the city. It was my first time here and I just loved it. Our hotel Die Port van Cleve was the original Heineken beer factory many years ago and then refurbished into a hotel. The pub downstairs sells the little bottles of Heineken which taste nothing like the Heineken we have in Canada...We walked everywhere that evening, stopping in little cheese shops for samples and experiencing the Red light district which was quite something...Amsterdam is a must see city and provides a great stopover from Africa for a couple of days. The. Van Gogh, Ann Frank Museums are a must, but better make sure you buy your tickets well in advance online. I heard the Anne Frank Museum has a 6-month wait list in high season. Another great way to see the city is on the canal boats. You can buy a 24hr hop on hop off pass which can take you everywhere you want to go in the city. 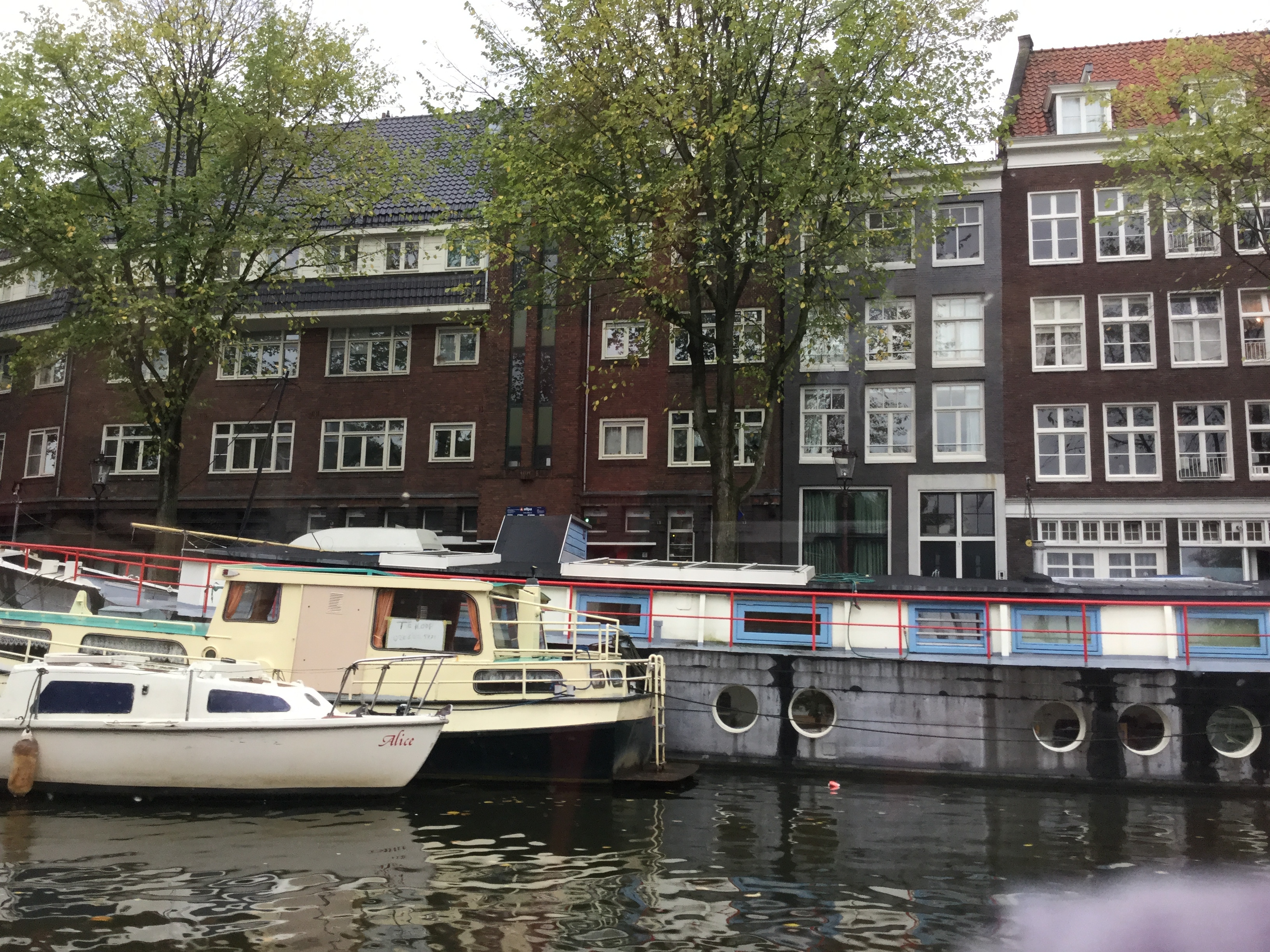 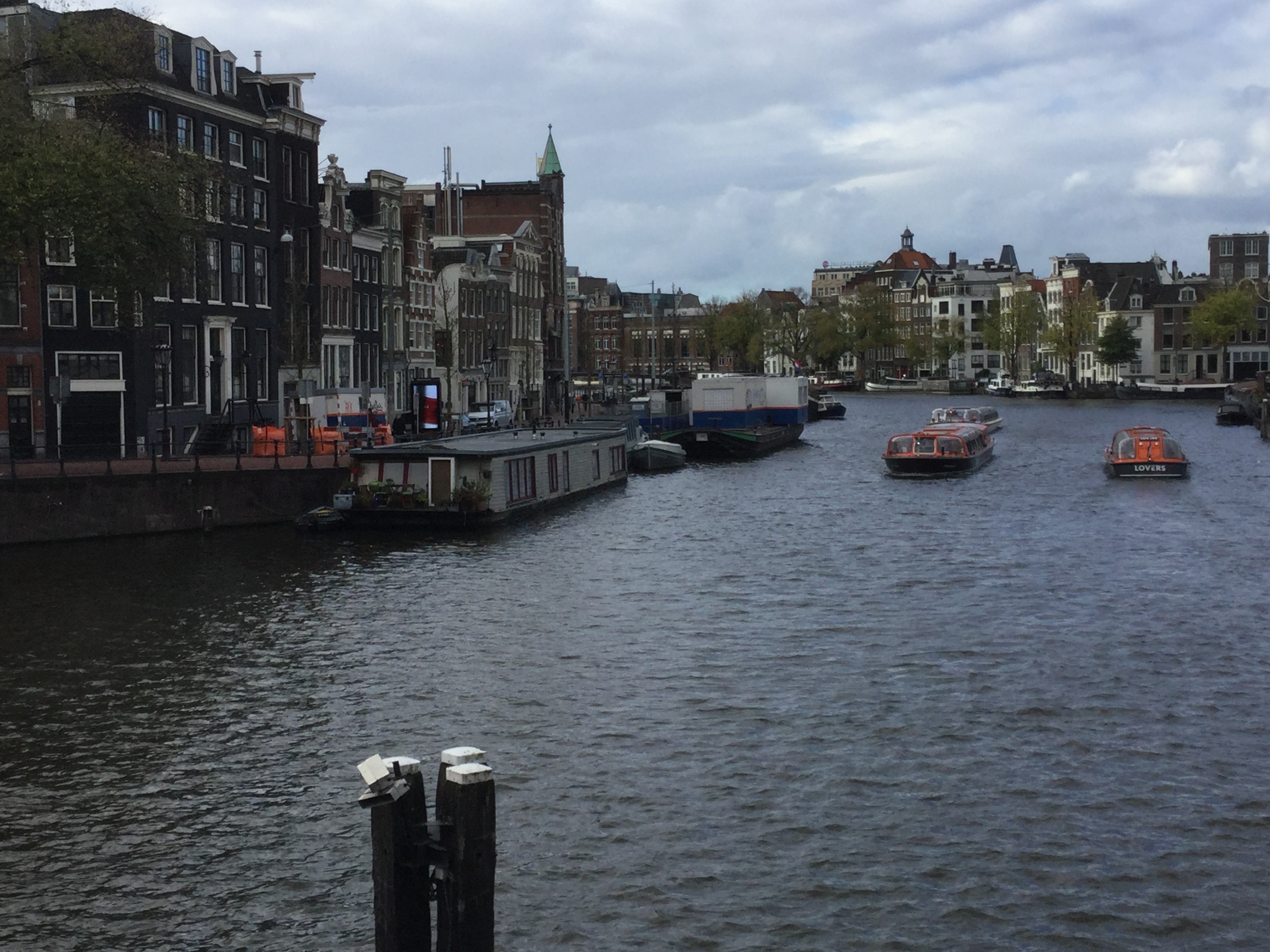